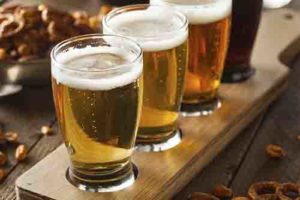 There is good craft beer almost everywhere currently – it can be found in cafes and restaurants, grocery stores, and even at Walmart! Charlottesville craft beer enthusiasts are especially lucky – the Central Virginia area is becoming a haven for craft beer lovers. Living in the Charlottesville area places you near so many wonderful options, like local brewpubs or a day trip to the scenic countryside. Explore the Brew Ridge Trail (http://brewridgetrail.com/) to experience outstanding beer, or go out to one of Charlottesville’s downtown breweries and pubs that pair great food with excellent beer. Get started with the suggestions below:

Blue Mountain craft beer is nationally renowned. Their legendary Dark Hollow stout (a beautiful waterfall on the Skyline drive bears the same name) is one of several notable brews made at their Nelson County brewery. Blue Mountain cultivates two hop fields in Afton as well as a new hop yard in Arrington, where they grow the Cascade hops used in their Full Nelson strong pale ale and other seasonal beers. The brewery holds medals from the World Beer Cup and the Great American Beer Festival for their brewery-grown fresh hop ale, Blue Reserve. Blue Mountain is also the only brewery in Virginia to win consecutive Gold Medals at the Great American Beer Festival. This brewery takes pride in brewing, bottling, canning and kegging all beers at the Afton site or in the Blue Mountain Barrel House in Arrington.

Kevin McElroy’s homebrew hobby led him to follow a dream and open a local craft brewery. Random Row was the result of his careful planning. The pub opened in 2016 with the mission to demystify beer and make brewing more accessible to first-time beer drinkers and brewmasters alike. Random Row is well known for its vast selection of delicious beers as well as its excellent food pairings. The local pub is devoted to giving back to the community by helping craft brewers learn how to perfect their techniques. This relaxed, laid-back neighborhood pub is a great stop for both the curious first-time brewer as well as the connoisseur.

Mary Wolf and her son renovated a historic Nelson County schoolhouse into a restaurant and brewery in 2011. Since then, Wild Wolf Brewing Company has produced an ever-expanding collection of lagers and ales that continue to win awards. Their beer can be found throughout Virginia and the Washington DC area. Wild Wolf produces six staple beers and offers more than a dozen seasonal brews and occasionally a single batch brew. The best way to enjoy these excellent Virginia beers is from the dog-friendly outdoor Biergarten at their brewery while you enjoy the gorgeous Virginia scenery.

Three friends wanted to enjoy good times with close family and friends and share a great beer. These three friends founded Three Notch’d Brewing Company, a local brewery that celebrates individualism and respect for hard work. The brewery focuses on actively giving back to the community, paying homage to the many historical figures of the region. Their unique and celebrated offerings show their desire to “Leave Their Mark”, and their efforts in the community prove that they encourage others to do the same.

The Crandalls of Devils Backbone Brewing company were on a ski trip in Europe when they tried an authentic German beer. This first experience inspired them to work to create the best beer in the region. The pair traveled throughout the US looking for the perfect location where active beer drinkers could combine their love for beer, hiking, biking, running, and beautiful scenery. They found their location in Virginia and realized their dream to own an authentic local pub that would celebrate the beauty of the area and the active lifestyles of the local residents. The result is a delightful location to run a 5K and enjoy a delicious, refreshing beer afterward.

Starr Hill, the pioneer responsible for setting the stage that is now a thriving Virginia beer community, is the second oldest craft brewery in Virginia. Starr Hill is famous for its passion for music, and its beers have been part of live music festivals like Bonnaroo and FloydFest. As a response to demand, the brew operation moved from their downtown storefront to a larger location in Crozet. Starr Hill’s unique blend of art and science produces a menu of craft beers that are inspired by some of the most beloved and innovative brewers nationwide. The historic storefront on Main Street was once the home of Virginia’s first craft brewery, Blue Ridge Brewing Company, and their finely honed artisanal brews express their respect for tradition.

Virginia’s oldest operating microbrewery is Legend Brewery, near Richmond. This full-service brewpub serves delicious food and award-winning beers. Their lagers and ales are well known and pair with some of the best burgers in Virginia. Legend offers six year-round brews, including their unique and delicious British-style brown ale. Their Bohemian-style pilsner has won two awards from the Virginia Craft Brewers Cup. In addition to their regular offerings, Legend also produces a collection of seasonal beers.

Eric McKay and Patrick Murtaugh’s lifelong friendship and mutual love of hand-crafted beer are the seeds that spawned this famous brewery in Richmond. Hardywood’s fame comes from a series of creative, soulful, innovative beers that are both thoroughly local and nationally celebrated. Hardywood operates a 12,000 square foot brew facility in Richmond’s historic German brewing distinct. Their taproom offers tasters, glasses, and growler fills for their brews, a collection that ranges from highly creative to old stand-bys. To try an authentic local Hardywood beer, start with the Hardywood Virginia Blackberry, an award-winning Belgian-style white ale that you can find in late summer.

Be adventurous and visit these breweries, or begin your “beer tour” by shopping the local shops and stores – you’ll find some wonderful beers from extraordinary Virginia breweries!

Living on the Lake

“The management is great; they are very courteous and responsive. The leasing process was very smooth, and the management made my move very stress free.”

“I love my apartment. Lakeside is so nice and you really get a lot for your money.”

Keep up with the latest news & events at Lakeside!